Paula Deen hopes the ruling allowing legal same-sex marriage in California will help her in a discrimination lawsuit. 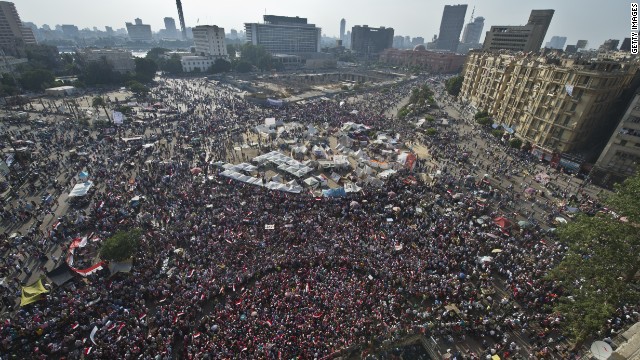 Thousands of anti-government protesters are camped out in Cairo's Tahrir Square, after one deadline passed for embattled Egyptian President Mohamed Morsy to step down, and another one is looming.

Morsy was elected Egypt's president in June 2012, but critics say he has become increasingly authoritarian during his year in power and has failed to revive Egypt's economy.

In an exclusive interview in Cairo in January, Egyptian President Mohamed Morsy told Wolf Blitzer that it would take time until real change came to Egypt.

"I would say to start real stability and development, there are steps," Morsy said. "We may take six months or a year. To reach what we want, I think we may take five or ten years to reach 60, 70 percent of what we want."

Former President George W. Bush and his wife, Laura, are in Africa this week, where they renovated a cancer screening clinic in Zambia and commemorated the victims of the 1998 U.S. Embassy bombing in Tanzania.

The clinic, which is designed help women fight cervical cancer, builds on the former president's work fighting AIDS on the continent. While he was in office, Bush set up a plan that dramatically reduced the number of AIDS deaths in Africa.

Beloved baby gorilla gets "gorilla-fied," then gets a mom. CNN's Jeanne Moos reports on a baby that'll make you go ape.