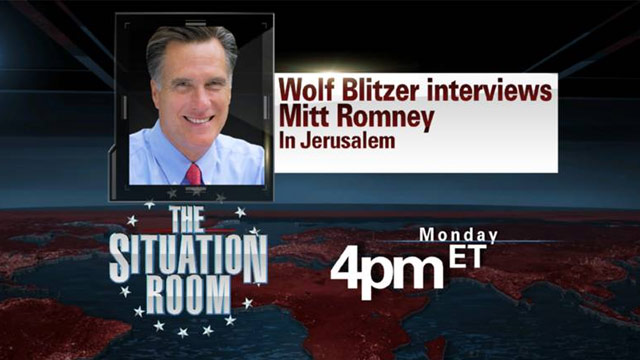 Wolf Blitzer will sit down with Mitt Romney in Jerusalem on Sunday for a one-on-one interview with the presumptive GOP presidential nominee. The full interview airs Monday 4-7pm ET during “The Situation Room with Wolf Blitzer” on CNN.

Israel is the second stop on Romney’s three-country tour meant to bolster his foreign policy credentials ahead of November’s general election. The 6-day trip also includes stops in the U.K. and Poland.

In Israel, Romney will also meet with Israeli Prime Minister Benjamin Netanyahu, Israeli President Shimon Peres and Salam Fayyad, the prime minister of the Palestinian National Authority. This will mark Romney’s fourth visit to Israel. He last traveled there in January 2011, and has had a long relationship with Netanyahu.

Do you have any suggested questions you would like Wolf to ask Mitt Romney? Please leave them in the comment section below and your question may be used during the interview.

Riots erupt in Anaheim, California, after a police shooting of an unarmed man. Casey Wian reports.

While it was one of 11 missions carried out by U.S. Special forces that night, the head of U.S. Special Operations command said the raid that killed Osama bin Laden will go down as one of the "great intelligence operations in history."

Admiral William McRaven spoke Wednesday before an audience at the Aspen Institute Security Conference on a panel discussion moderated by CNN's Wolf Blitzer. The talk was his first interview about the raid with a journalist.