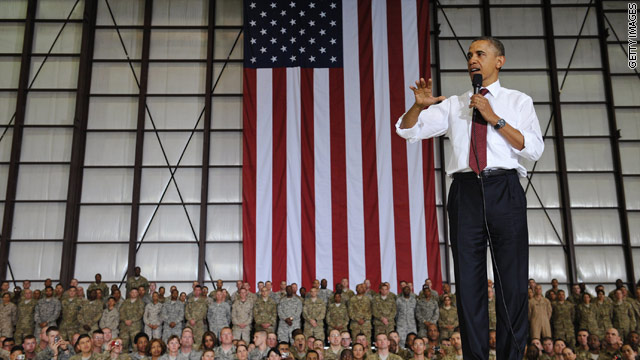 Unfortunately, some of the nearly 90,000 American troops still in Afghanistan will be killed or severely wounded. Others will come back to the United States suffering from post-traumatic stress disorder and other long-term ailments. The costs of this war will continue long after all U.S. combat troops are out of Afghanistan at the end of 2014.

Obama certainly understands all of this. He says “there will be difficult days ahead” and “the enormous sacrifices of our men and women are not over.”

In his remarks to the troops and later to the American public, he made his case for a long-term strategic partnership with Afghanistan. But the president should have been more transparent in discussing the costs of his strategy. Unfortunately, there is so much he did not say.

He never mentioned how much American taxpayers will have to spend over the next two and a half years maintaining tens of thousands of troops in Afghanistan. The numbers are staggering.

It costs roughly $2 billion a week to maintain the current level of 90,000 troops. That’s more than $100 billion over the next year alone. Even with the scheduled troop reductions, U.S. taxpayers are going to have to shell out at least $200 billion between now and the end of 2014.

On the issue of troop levels in Afghanistan, the president said: “Last year, we removed 10,000 U.S. troops from Afghanistan. Another 23,000 will leave by the end of the summer.”

That, of course, is accurate.

Here’s what he didn’t say:

I think it’s fair to say that Afghanistan is now clearly his war.

He didn’t give us the answers to those questions because he himself doesn’t know the answers. All those sensitive issues still have to be resolved in negotiations with Afghan President Hamid Karzai’s government.

Republican presidential candidate Mitt Romney, by the way, has been very vague in outlining what he would do in Afghanistan. He issued a rather bland statement last night after Obama’s speech.

In recent months, Romney has dodged the tough questions, usually saying only that he will want to consult with his commanding generals on the ground before announcing his own strategy.

In my opinion, that’s not good enough.

We know what Obama wants to do in Afghanistan. Now, the American public will want - and will certainly deserve - a lot more specifics from Romney, given the enormous stakes in American blood and treasure.

Watch "The Situation Room with Wolf Blitzer" Wednesday from 4-6pm ET on CNN for more on President Obama's Afghanistan visit.

RELATED STORY: Obama vows to 'finish the job' in Afghanistan