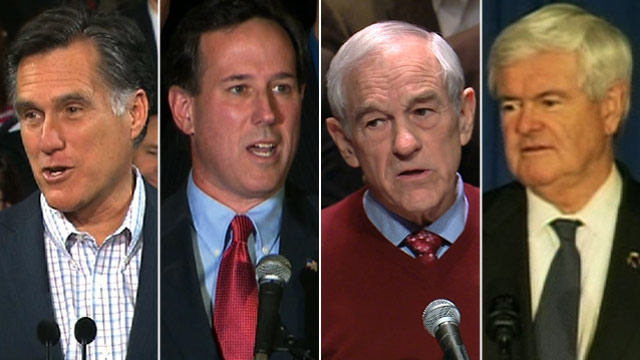 (CNN) - This Republican race for the White House shows no sign of wrapping up any time soon.

Newt Gingrich says he’s ready for it to go all the way to the Republican National Convention in Tampa, Florida, in August. He probably will do well in several Southern states holding contests on Super Tuesday, March 6.

Ron Paul tells me there would be a “rebellion” among his supporters if he were to drop out. He could do well Saturday in the Maine caucuses.

Rick Santorum had a make-or-break day Tuesday in Missouri, Minnesota and Colorado. By winning all three contests, he has fresh momentum and will start raising a lot more money.

Mitt Romney certainly has the best organization and the most cash on hand - backed by an impressive super PAC. He remains the GOP front-runner, but he doesn’t have anything locked up yet.

The former Massachusetts governor really needs to do well in the February 28 contests in Arizona and Michigan.

By all accounts, he should score in those two states. He did well in both states four years ago. There is also a large Mormon population in Arizona, and his father, George Romney, was governor of Michigan in the ‘60s.

CNN has two debates scheduled in the coming weeks - on February 22 in Arizona and March 1 in Georgia. We’ll see how those debates affect the race.

In 1976, President Gerald Ford faced an intense challenge from former California Gov. Ronald Reagan. It was a bitter battle between the establishment candidate (Ford) versus the so-called real conservative. It went all the way to the GOP convention that summer.

Ford narrowly beat Reagan for the nomination, but the long battle cost him big time. Ford later lost the general election to another former governor, Jimmy Carter of Georgia.