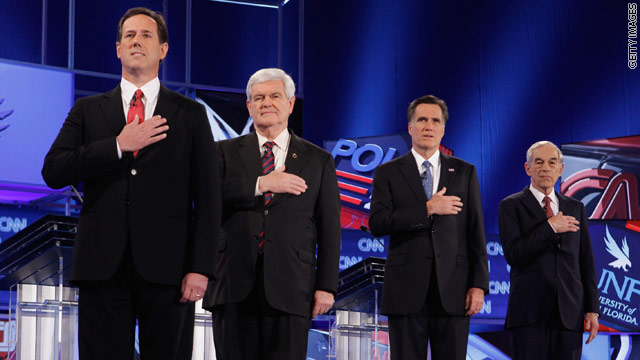 (CNN) - Looking ahead to Tuesday’s GOP presidential contests in Missouri, Colorado and Minnesota, I can’t help but suspect we might get some surprises when the dust settles late into the evening.

All three are also battleground states in the November election.

Rick Santorum, for example, could win the Minnesota caucuses. That would certainly give his campaign a badly needed boost.

Ron Paul has a passionate army of supporters, and he could score some gains in Colorado and Minnesota.

Mitt Romney will be in Colorado on Tuesday. I suspect he will win there, but I haven’t seen any really reliable polls in recent days.

Newt Gingrich isn’t even on the ballot in Missouri, which is holding a nonbinding primary.

By the way, the Maine caucuses have been going on for days, but they wrap up on Saturday. Paul probably will do well in that politically independent state.

The contests in Arizona and Michigan at the end of this month could be even more important. Both of these states will also be battlegrounds in November.

Romney is the front-runner in Arizona and Michigan, but the other three candidates show absolutely no intention of dropping out no matter what happens.

Paul told me over the weekend that he would face a “rebellion” among his supporters if he were to withdraw. He won’t anytime soon.

Santorum believes that if Gingrich were to drop out, he would emerge as the non-Romney conservative in the race. So he’s also not budging.

Gingrich predicts he will do well in the March 6 Super Tuesday primaries and caucuses, especially in the Southern states. He also insists he and Romney will have about the same number of delegates after the Texas primary in April. I think the former House speaker believes Gov. Rick Perry will help him there.

RT @CNN: "We let a scumbag back out on the street” - In an interview wit@wolfblitzerer, former NBA star and TNT analyst Charles Barkley rea…
CNNSitroom