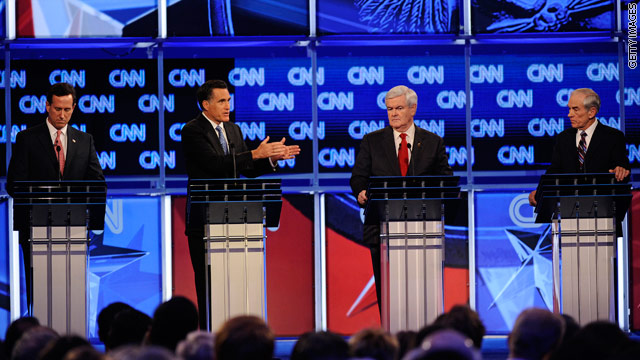 (CNN) - And now there are four Republican presidential candidates left in the contest.

They were all on the stage Thursday night at the tough CNN debate in South Carolina.

One of them will almost certainly face President Barack Obama in November. There is still a tiny chance no one will emerge with enough delegates to wrap things up. I suppose, at least theoretically, there could be a brokered convention in Tampa, Florida, at the end of August.

But that is unlikely.

As I watched the four candidates debate Thursday night, I thought about the eventual GOP ticket.

If Romney were to get the nod, for example, would he ask one of the other three to be his running mate?

If one of the other three were to get the nomination, would he pick someone on that stage as a running mate?

There is a history of presidential nominees selecting a former rival – even one who said some nasty things in the heat of campaign.

As recently as four years ago, then-nominee Obama asked Joe Biden to be on the Democratic ticket even though Biden had said some tough things about Obama during the campaign.

In 1980, Ronald Reagan asked George H.W. Bush to be his running mate even though Bush had blasted Reagan’s “voodoo economics” during the campaign.

Despite that history, as I watched the debate Thursday, I concluded that there was simply too much bad blood spilled on that stage to make it work this time. Santorum said Gingrich had “no discipline, no ability to pull things together.” Romney slammed Gingrich, saying, “You talk about all the things you did with Ronald Reagan. ... You’re mentioned once in Ronald Reagan’s diary.” And Gingrich piled on Romney, citing examples of companies that suffered under Bain Capital. I think that it would be hard for these candidates to forget those stinging comments.

I could be wrong. Politics can be very strange. But if that were to happen, I have to admit I would be surprised.