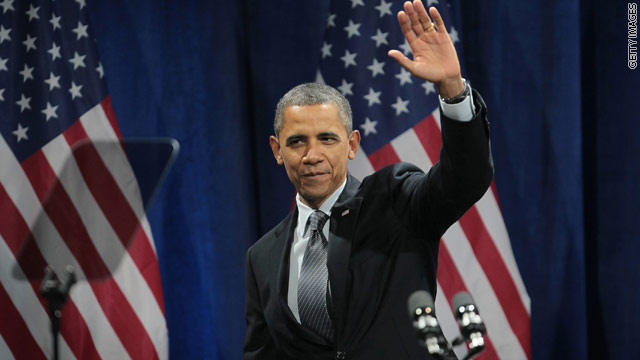 (CNN) - President Obama is now in full re-election campaign mode. If there was any doubt, just check out the campaign speeches he delivered Wednesday night at three separate fundraising events in Chicago.

“I’ve said before, I’m not a perfect man,” he told one Chicago group. “I’m not a perfect president. But I’ve promised you this, and I’ve kept this promise. I will always tell you what I believe. I will always tell you where I stand. I will wake up every single day thinking about how I can make this country better, and I will spend every ounce of energy that I have fighting for you.”

The audience, of course, erupted in applause. He inspired them. It was vintage 2008 Barack Obama on the campaign trail.

If you need further evidence that he already is way deep in campaigning, just check out the amount of money he’s raised so far, without any Democratic primary challenger. When all the numbers are in on the Republican side, I suspect we will see that Obama raised more money in the last quarter than all the Republican candidates combined.

That doesn’t include the super PACs on the Republican and Democratic sides.

By the way, the president still has that extraordinary ability to effectively read a speech from a teleprompter without making it look like he’s actually reading the speech.

And I noticed the other day that Republican presidential front-runner Mitt Romney has gone to President Obama’s playbook and learned that technique as well.

In Des Moines, right after the Iowa caucuses, the Romney folks had the teleprompter all set up for him, but pulled it at the last minute. He gave what was widely considered a lukewarm, off-the-cuff stump speech. We had heard it on many occasions. His remarks were widely panned.

But in Manchester this week, after the New Hampshire primary, he very effectively used the teleprompter and delivered a strong, well-written and compelling speech that outlined his vision. He did a very good job.