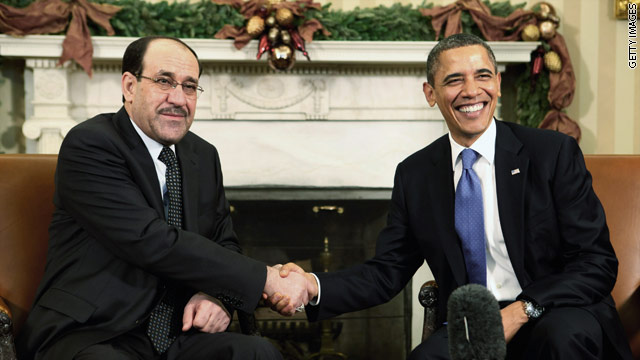 (CNN) - On Monday at the White House, President Barack Obama and Iraqi Prime Minister Nuri al-Maliki were upbeat in discussing the future of Iraq. I hope they are right, but like so many U.S. officials and outside experts in Washington and the region, I am deeply worried about the direction of that embattled country.

Item: The Iraqi government - almost alone in the Arab League - continues to reject Arab League efforts to sanction the regime of Syrian President Bashar al-Assad. Again, that’s because Iran supports the Damascus regime and has a lot of influence in Baghdad as well.

Item: If the U.S. military hands over to Iraq the last terrorist detainee it’s holding, there’s a good chance that he will be set free and allowed to go to Iran. The Lebanese terrorist, Ali Musa Daqduq, is affiliated with Hezbollah and murdered five American troops in Iraq in 2007.

It’s all pretty depressing given the enormous blood and treasure the U.S. invested in liberating Iraq from Saddam Hussein’s regime.

I was in Kuwait on the eve of the U.S.-led invasion in March 2003. At the time, I assumed the military campaign would be swift and decisive - just like the first Gulf War in 1991, which I also covered. That 1991 air and ground war lasted about six weeks.

If someone would have said to me in 2003 that U.S. troops would only be leaving Iraq by the end of 2011, I would have thought them crazy.

Obama had opposed the war as an Illinois legislator. At one point, he called it a “dumb war.” He refused to say today that he still believed it was a dumb war. Instead, he expressed confidence that things were moving in the right direction now. I hope he’s right, but I have my doubts.