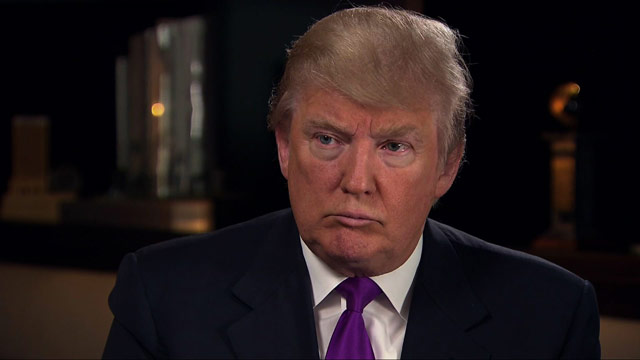 New York (CNN) - I spent some quality time with Donald Trump today at his office in New York. Having interviewed him many times over the years, I can assure you he remains vintage Trump. He has very strong views on virtually every issue out there – though they are not always what you might think.

He doesn't lack in self-confidence. He's understandably very proud of his accomplishments. He's a firm believer of what my father used to say to me all the time growing up in Buffalo, New York: "Remember, son, if you don't promote yourself, no one else will."

He's out with a new book, "Time to Get Tough: Making America #1 Again." Walking into Trump Towers on 5th Avenue, I could see the billboards in the lobby announcing the upcoming book signing event. I'm sure the book will be a bestseller. All of his books do well. He certainly has a following, and it goes beyond his NBC "Celebrity Apprentice" viewership.

Having said all that, I could sense his disappointment that all of the Republican presidential candidates didn't immediately agree to his Newsmax-sponsored debate on December 27 in Iowa. As of this writing, only Newt Gingrich and Rick Santorum have said yes. As I told him during the interview, that's not much of a debate.

Rick Perry and Mitt Romney have politely declined. Ron Paul and Jon Huntsman have made some tough comments about Trump when saying no to the debate, and Trump is not shy about responding in kind.

The chairman of the Republican Party, Reince Priebus, said it would be a problem for Republicans to participate in the debate if Trump continues to hold out the possibility of running as a third party candidate if he doesn't like the eventual Republican nominee. In the face of that, Trump does not back down. He never does. He's Donald Trump.

By the way, he stands by what he wrote in his new book – namely, that his net worth is more than $7 billion even though Steve Forbes in his magazine lists it at just under $3 billion. During my interview with Trump, he makes his case passionately and explains why he decided to release his personal financial information in the book.

Watch the “The Situation Room" on CNN today for the full interview. It will air during the 5 p.m. ET hour.