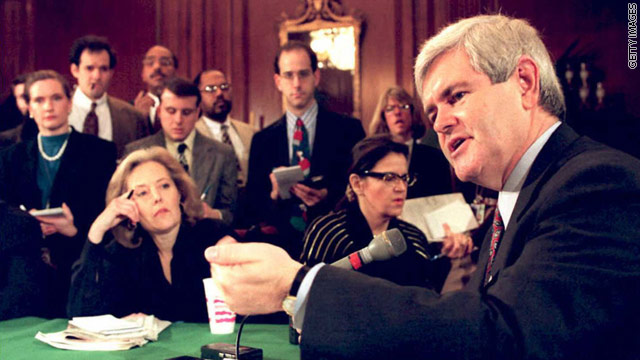 BLITZER'S BLOG: This time Gingrich has the fire

(CNN) - Watching Republican presidential front-runner Newt Gingrich in action brings back lots of memories. I’ve been covering him for a long time. I’ve seen his ups and his downs.

While preparing for my interview Wednesday with the former House speaker in Washington, I reviewed an early interview I had with the then-new speaker on June 10, 1995. I was CNN’s senior White House correspondent and was also anchoring “Inside Politics Weekend.” (Our tag line: “The events, the issues, the battles, the bites.”)

So much of what he said then is similar to what he says today.

At the time, he was thinking of challenging Bob Dole for the Republican presidential nomination to oppose Bill Clinton for a second term. “I think I intend to allow the door to stay open probably until close to filing in New Hampshire,” he told me.

By leaving the door open, he said the news media would cover his speeches.

He insisted his goal was to be an educator. “I tried teaching a 20-hour course which I taught for free, which was shown all over the country. I couldn’t get reporters who were interested in looking at it. But if we drop the word ‘presidential’ possibility, we have 15 cameras at a speech.”

In the end, he decided not to run - and he hinted at that during the interview.

“Would I like to be president? Probably. It’s not the burning desire on my part. I frankly like being speaker.”

He added, “Frankly, I am more interested in getting the ideas out and getting people to look at renewing American civilization and competing in the world market and accelerating the change in the information age.”

But that was then. I suspect he now does have a burning desire to be president. Knowing Gingrich, I suspect he can begin to feel there’s a real possibility of that happening, and he’s pumped.

This is all vintage Gingrich. He’s been honing his lines for a long time. Like all of you, I’m curious to see how this all plays out.

Tune to the "Situation Room with Wolf Blitzer" tomorrow 4-6 p.m. ET for Wolf's interview with Newt Gingrich. Do you have any suggested questions for the interview? Submit them to our Facebook page here and your question may get asked.