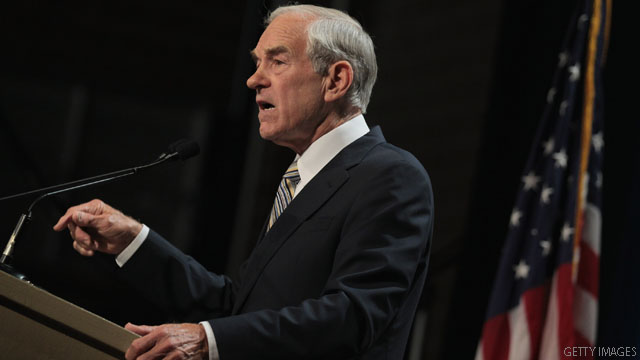 (CNN) – Republican presidential candidate Ron Paul is making it clear that he doesn’t think there’s a whole lot of difference on the most important issues between his rival Mitt Romney and President Barack Obama.

“Would there be a change in foreign policy?” Paul asked during an interview on NBC's “Meet the Press.” “No, there would not be.”

He then insisted that there was really no difference between Romney and Obama on entitlement spending, auditing the Federal Reserve and cutting the nation’s debt.

“No,” Paul insisted. “There would not be a significant difference between the two – although on the edges, maybe. … So, no, the regulatory system, the spending, the deficits, the printing of money, they stay the same.”

When I heard that, I again wondered what the Republican congressman from Texas would do if Romney won the Republican nomination. Would he jump on the Romney bandwagon, or would he run as a third-party candidate?

Earlier in the month, I asked Paul whether he could support Romney if he won the nomination.

He replied that none of the Republican candidates was advocating his positions. “So I would have to find out exactly what their positions are and what the platform is that they would be running on,” he said.

I pressed and asked whether it were possible that he would run as a third-party candidate – which he did in 1988, when he was the Libertarian Party presidential candidate. “I haven’t thought about it, and I have no plans to do that,” he said. “So, no, that wouldn’t be in the cards for me.”

I believe Paul. I don’t think he’s spent a lot of time thinking about that third-party contingency. He is focused now on winning the nomination.

But it certainly would be intriguing if Romney did win the nomination and Paul decided to challenge both him and Obama for the presidency.

Would Paul take more votes away from the Republican or Democratic candidate?

Since he’s a Republican, the immediate assumption is that he would hurt the Republican nominee and maybe even ensure Obama’s re-election.

But you could make a case that Paul also appeals to many isolationist and deficit-cutting Democrats who are deeply worried about Obama’s economic policies.

It’s all very hypothetical but still a fascinating topic for political junkies like me to ponder.