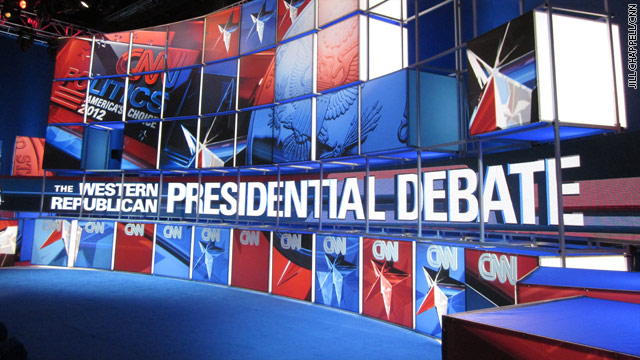 But as good as parts of Las Vegas look on the outside, deep problems become obvious when you take a closer look. Nevada has the highest unemployment and home foreclosure rates in the country - with no quick end in sight.

Seven Republican presidential candidates are here for the CNN Western Republican debate tonight. I have no doubt Nevada's problems will be on the agenda, because they are also the nation's major problems right now: How do we create jobs and jump-start the U.S. economy?

The seven candidates will be eager to go after President Obama and his jobs creation record. That won't be a surprise. What will be interesting is how far they will be willing to go after each other on the specifics.

I will be especially interested to see how willing Mitt Romney, for example, will be to reject Herman Cain's 9-9-9 tax reform plan. If you believe in the national polls, Romney and Cain are now the two front-runners for the nomination.

I also want to see if Rick Perry can make a comeback after some unimpressive debate performances. He released his energy plan last week and did brief interviews on five morning television shows. He didn't make any major gaffes. Let's see how he does tonight.

Michele Bachmann needs to stand out tonight; otherwise, she will continue to dwindle in the polls.

Newt Gingrich, Ron Paul and Rick Santorum are all strong debaters. Based on my most recent conversations with them leading up to tonight, they are all ready to go - full speed ahead.

In short, it will be lively on the Las Vegas Strip tonight. And at the debate, what happens in Vegas won't stay in Vegas. The whole world will be watching on CNN.