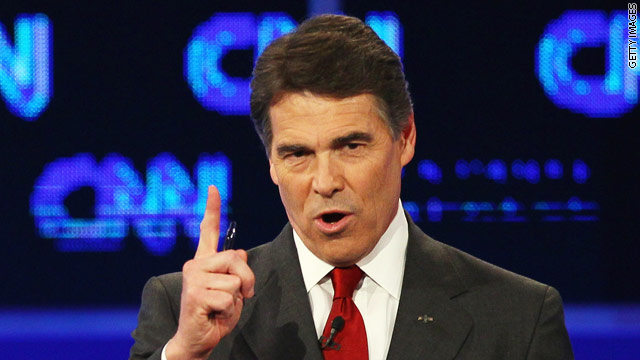 (CNN) - Whether you agree or disagree with his stance, you have to give Texas Gov. Rick Perry credit for sticking to his guns on some sensitive issues that many tea party and other conservative Republican activists actively oppose.

I’m talking about his support in Texas for in-state tuition rates for children of illegal immigrants and for a mandate to provide the HPV vaccine for young girls to prevent them from developing the sexually transmitted infection that can lead to cervical cancer.

On both of those issues, U.S. Rep. Michele Bachmann and other presidential hopefuls openly opposed him at the CNN/Tea Party Republican Debate in Tampa, Florida, on Monday night. Some tea party supporters in the audience booed him.

But Perry did not back down on either issue at the debate or in the days since.

And although he clearly softened his position on Social Security, he also didn’t back away from his earlier highly charged criticism of it as a Ponzi scheme.

So what does this say about the Republican presidential front-runner?

To me, it says he does not want to be accused of flip-flopping. That’s been a major problem for his chief rival right now, former Massachusetts Gov. Mitt Romney. That flip-flopping charge plagued Romney four years ago and continues to haunt him now.

I suspect Perry wants to show he’s tough and principled on his bottom-line issues. He probably senses that will make him a more attractive candidate when all is said and done even if some of those positions are unpopular with conservatives.

We’ll see how that strategy plays out.