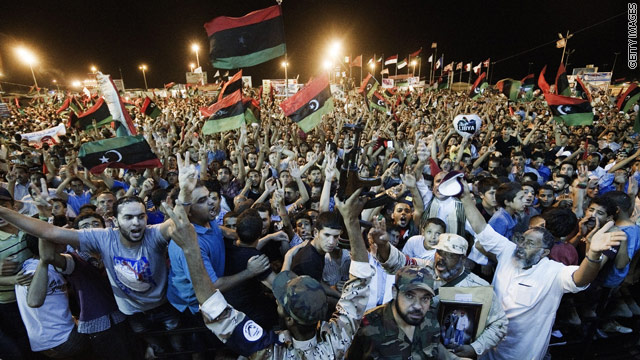 Libyans celebrate the arrest of Ghadhafi’s son Saif al-islam and the partial fall of Tripoli in the hands of the Libyan rebels on August 21, 2011 in Benghazi, Libya.
August 22nd, 2011
01:36 PM ET

(CNN) - If you’re watching Tripoli from Damascus and your name is Bashar al-Assad, you’re very nervous.

The Arab spring continues to unfold in dramatic ways.

The key will be the Syrian military and security services. Will they remain blindly loyal to al-Assad’s regime, or will we start seeing cracks? I suspect that some senior military officers eventually will say no more killing and torturing of unarmed civilian demonstrators.

It’s at that point that al-Assad rule could really be endangered.

The Libyan rebels received enormous assistance from the NATO allies. The airstrikes pounded Gadhafi’s troops and military facilities. In the end, the no-fly zone worked.

It’s unlikely that NATO will launch a similar operation against al-Assad’s military. I don’t see any desire on the part of the U.S. and its NATO allies to ask the United Nations Security Council to impose a no-fly zone over Syria.

Still, al-Assad should not rest easy. What eventually could bring him down is what brought Mubarak down – namely, the will of an angry and frustrated people seeking freedom. In the end, that may be even more powerful than NATO airstrikes.