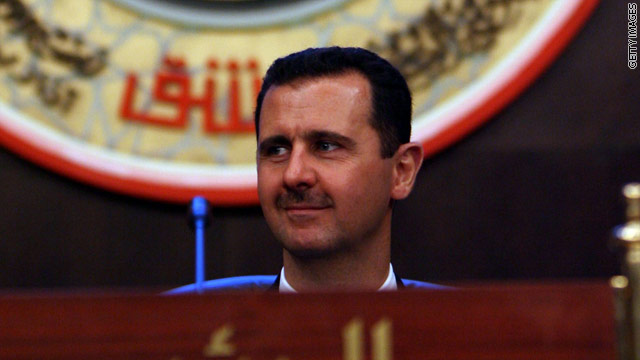 I suspect he can’t simply retire somewhere in Syria. The protesters in Syria no doubt would like to arrest him and try him for killing more than 2,000 people in the last few months. They probably would like to see him in a courtroom cage – sort of like what Egyptians have done to their former president, Hosni Mubarak.

Other human rights activists probably would like to see the United Nations Security Council recommend that al-Assad be brought before the International Criminal Court and tried for crimes against humanity – along the lines of the late Serb leader Slobodan Milosevic.

Most of the Syria experts I’m hearing from believe al-Assad will try to maintain his power for as long as possible. That’s what Moammar Gadhafi has done so far in Libya though there are now reports that his days in power may be numbered. We shall see.

I have no doubt that both Gadhafi and al-Assad will do whatever they can to make sure they don’t wind up like Mubarak or Milosevic. That means many more people will die.

One final note: On Thursday I wrote about Iraqi Prime Minister Nuri al-Maliki siding with Assad and the Syrian leader’s main backer, Iranian President Mahmoud Ahmadinejad. I noticed Friday that The New York Times is now reporting that al-Maliki says Israel will benefit the most from the Arab Spring.

“There is no doubt that there is a country that is waiting for the Arab countries to be ripped and is waiting for internal corrosion,” he said in Baghdad. “Zionists and Israel are the first and biggest beneficiaries of this whole process.”

I am sure the protesters who have risked their lives in Egypt, Syria, Tunisia and elsewhere in the Middle East and North Africa will disagree with him.