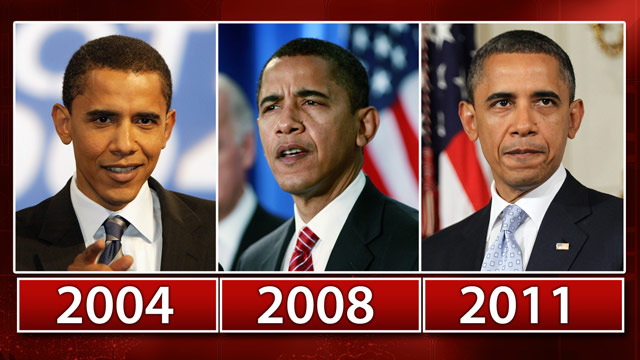 (CNN) - Like every president before him, Barack Obama has aged dramatically since taking office. It comes with the territory.

I’m back in Washington after three days in Iowa, including time with the president. We had an in-depth, on-camera interview. We also had a chance to chat off-camera. Let me share my impressions.

When we met Tuesday in Peosta, Iowa, I recalled sitting down with him at the Democratic Convention in Boston in 2004 when he gave the keynote address and at one of his final campaign rallies in Des Moines, Iowa, at the end of October 2008, only days before his election. I told the president I would post pictures of him in 2004, 2008 and now - so that everyone could get a flavor of how he’s aged.

“Some people,” he told me, “some old friends who I have been seeing around here, have reminded me that when I was a young senator traveling through Iowa that I looked a little younger than I do now.”

That is certainly true. He recently turned 50.

He seems a bit slimmer, too, even though he likes to eat - including burgers, fries and other less than perfectly healthy meals. White House staffers tell me he does exercise every day, usually while he watches sports. It’s his opportunity to break away - even briefly - from the responsibilities and pressures of the job.

After the interview, many people asked me if he seemed nervous, tense or worried about getting re-elected.

He said he loves being president. “It’s the greatest job on Earth,” he said.

The only time he really got emotional was when I asked him to tell me the worst part of his job.

“The worst part is when you are talking to a family member of a fallen soldier and you are hugging them. On the one hand, you hope that you’re making them feel a little bit better. At the same time, you are reminded of the incredible sacrifices that people are making for our country. And then, when you see sometimes our politics not living up to that level of commitment and patriotism that we see from our troops - that gets a little bit of frustration.”

He added, “For a mother or a father who’ve lost a loved one, that’s always the toughest thing about the job.”

One final note: Even though he largely took the high road in avoiding too much criticism of his potential GOP challengers, I got the sense that would certainly change once the Republicans firmed up their nominee and the 2012 race for the White House really gets going.