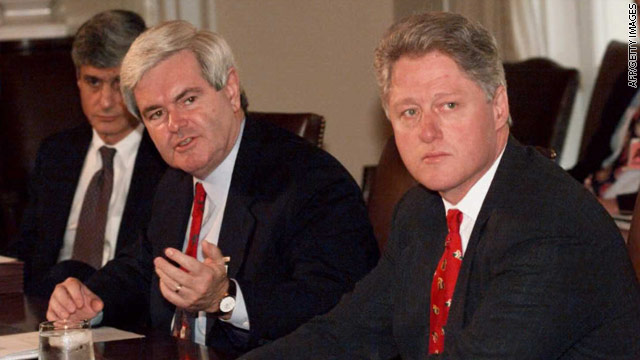 In this December 22, 1995, image, House Speaker Newt Gingrich and President Bill Clinton meet at the White House to reach a compromise that will reopen the U.S. Government.
July 27th, 2011
01:43 PM ET

Washington (CNN) - At this point during President Bill Clinton’s first term at the White House, he, too, was facing an enormous challenge from emboldened House Republicans, including the then new Speaker, Newt Gingrich. The Republicans had taken the House majority in 1994 with their Contract with America. There was a huge battle over spending, and the government was shut down for a few days. The American public largely blamed Gingrich and the Republicans. Clinton, the following year, was re-elected.

President Obama is now facing a huge challenge from emboldened House Republicans, including Speaker John Boehner. The stakes this time are much higher if the government actually were to default on its financial obligations.

Some Democrats look back on the 1995 government shutdown and insist any such similar shutdown now would be good politically for Obama’s re-election prospects. The public, they say, again would blame the Republicans. They do have some recent polling numbers to back them up.

But what they ignore is something much more significant.

I was then CNN’s Senior White House Correspondent and covered this story every step of the way.

The U.S. economy in 1995 and 1996 was strong and growing. Millions of jobs were being created. Unemployment was relatively low. Bill Clinton benefited enormously from the good economic news.

The current U.S. economy, on the other hand, is fragile. The recovery has been slow. Unemployment remains above 9 percent. The prospect of dramatic improvement between now and November of next year, according to most analysts, is not very great.

Bottom line for those recalling then and now: President Obama almost certainly won’t have the solid economy that President Clinton had in helping him get re-elected. And as James Carville famously said in 1992 in promoting Clinton’s presidential campaign: “It’s the economy, stupid.”