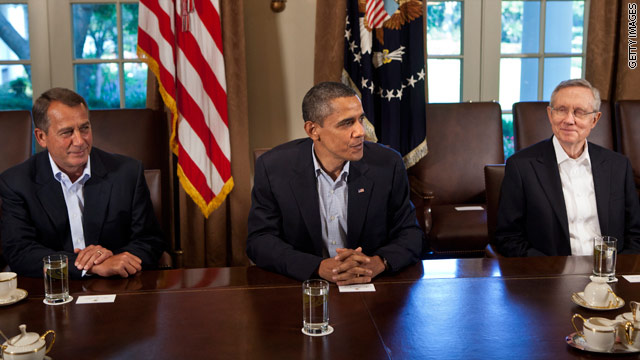 (CNN) - There’s a very high-stakes game of chicken under way in Washington right now. The two sides have no choice but to reach an agreement in the coming days. Let’s see which side blinks.

President Obama says he fully expects a deal by August 2 raising the nation’s debt ceiling. But he also says he won’t accept any short-term, stop-gap deal – whether for 30, 60, 90 or even 180 days. Any agreement, he says, must go beyond the November 2012 elections.

He also says it must be “fair and balanced” (his words) – meaning there must be both major spending cuts as well as increases in tax revenue. The elimination of various tax loopholes and deductions wouldn’t kick in until 2013, the president says. He says he’s ready to put Social Security and Medicare on the table, a move that has deeply irritated many in his Democratic Party base.

House Speaker John Boehner says he, too, wants a deal and favors a balanced approach. But his definition of balance means something else. He says the spending cuts will be balanced by raising the debt ceiling. There is no room, he adds, for any tax increases.

The two very different positions are pretty clearly spelled out. The question now is can the president and the speaker finesse some sort of compromise that allows the debt ceiling to be raised.

I suspect if it were simply up to Obama and Boehner, they would reach some sort of compromise. But it’s certainly not so simple. Boehner needs to bring along his Republican Party base, including the tea party activists. Many of them insist they won’t vote for a debt ceiling increase under any circumstances – even if there are no tax increases in the deal.