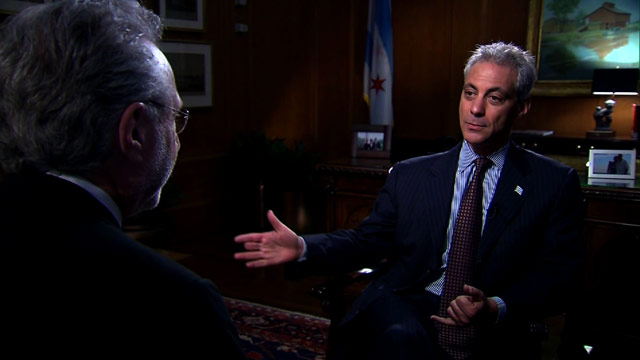 BLITZER’S BLOG: Sitting down with Rahm Emanuel and Bill Clinton in Chicago

Chicago (CNN) - I’ve covered Rahm Emanuel for many years – going back to 1992 when he was a young political aide to then-Governor Bill Clinton who was running for president. He later joined President Clinton at the White House before heading back to his native Chicago to make some money in the financial investment business. After that, he came back to Washington as a congressman and remained as President Barack Obama’s first White House Chief of Staff. But I must say I have never seen him as enthusiastic and excited as he is now as Mayor of Chicago.

We met in his large office. There’s lot of history here. He knows he’s following in huge footsteps. He was pumped about his responsibility and challenge. And he was understandably proud that a son and grandson of immigrants had reached this point. My interview with him will air tonight in The Situation Room during the 6 p.m. ET hour.

I’m also in Chicago to interview Bill Clinton at his Clinton Global Initiative conference on the U.S. economy and creating jobs. We will sit down Thursday morning. The former president has lots of ideas on how to get the U.S. economy going again.

Like Rahm Emanuel, President Clinton has often mentioned to me his very humble roots in Arkansas and his amazement that he could grow up to become President of the United States.

These two men come from very different backgrounds but have much in common beyond their politics. Agree or disagree with them, they are both very smart with amazing drive and ambition and a ton of energy. Mayor Emanuel told me he works out seven days a week and he spelled out his rough routine. You’ll hear it later today on the show. Last year when I interviewed President Clinton, he described his exercise routine and his healthy eating habits. Let’s see what he adds tomorrow.