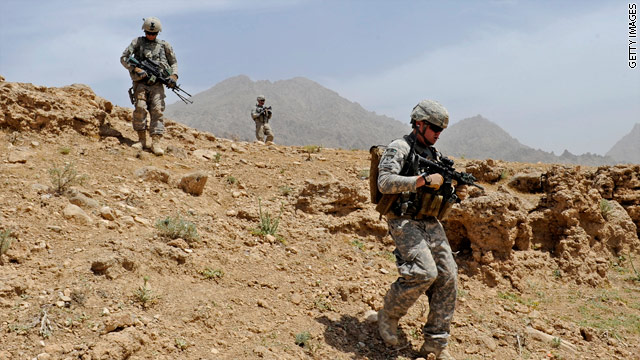 There’s an increasingly vocal group of liberal Democrats and conservative Republicans calling for a much more speedy withdrawal from Afghanistan. They are also getting frustrated with the stalemate in Libya. This odd alliance includes folks like Representatives Ron Paul and Jason Chaffetz on the right and Dennis Kucinich and Barney Frank on the left. Pressure is mounting on President Obama and his team to get out of Afghanistan especially now that Osama bin Laden is dead. The U.S. now has 100,000 troops in Afghanistan; NATO allies have another 40,000. U.S. Taxpayers spend more than $100 billion a year maintaining that troop presence in a country where the seemingly ungrateful Afghan leader, Hamid Karzai, is threatening to declare the U.S./NATO forces as “occupiers.” If that’s how he and his supporters feel, there are certainly other ways for the U.S. to spend $2 billion a week.
END_OF_DOCUMENT_TOKEN_TO_BE_REPLACED

CNN: 5 U.S. troops killed in Iraq, military says
Five U.S. servicemembers were killed Monday in central Iraq, the U.S. military said in a written statement. The deaths are the single largest loss of life among U.S. troops in Iraq since 2009, and they come as Iraq debates whether to request U.S. troops stay beyond a January 1, 2011, deadline that requires 46,000 American forces out of the country.

New York Times: Steeper Pullout Is Raised as Option for Afghanistan
President Obama's national security team is contemplating troop reductions in Afghanistan that would be steeper than those discussed even a few weeks ago, with some officials arguing that such a change is justified by the rising cost of the war and the death of Osama bin Laden, which they called new "strategic considerations." These new considerations, along with a desire to find new ways to press the Afghan president, Hamid Karzai, to get more of his forces to take the lead, are combining to create a counterweight to an approach favored by the departing secretary of defense, Robert M. Gates, and top military commanders in the field.

CNN: What next for Yemen – implosion or a tribal bargain?
The rocket that hit Yemen's presidential compound Friday and injured President Ali Abdullah Saleh achieved what months of mediation had not – loosening Saleh's viselike grip on the presidency after 33 years. Late Saturday night, Saleh arrived in Saudi Arabia for medical treatment and the nation's vice president assumed his powers. Diplomats in the Gulf say the Saudis are not likely to help Saleh get back to Yemen, even if he were well enough to travel. …Which begs the almost unanswerable question: What next for Yemen?

CNN: Test results expected in E. coli probe; German sprouts suspected
Test results expected Monday could determine whether sprouts grown in Germany are the source of a deadly E. coli outbreak that has killed 22 people.
But authorities said they might not find any evidence of E. coli if it affected only a batch of bad sprouts and is no longer in the supply chain.

A tale of two Weiners

One Weiner cries while another gets served on French bread. CNN's Jeanne Moos has the juicy details.

The Situation Room around the world

Good news for our international viewers: Starting today, The Situation Room will be broadcast LIVE on CNN International at 6 PM ET Monday – Friday in Europe, Africa, the Middle East, Central America, and South America. That's 7 PM in Buenos Aires, 11 PM in London, 12 AM in Berlin, 1 AM in Tel Aviv, and 2 AM in Dubai.